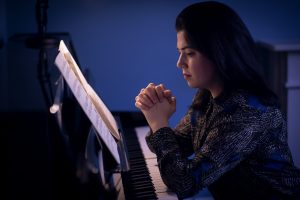 “As a British/Azerbaijani pianist, I have been performing a wide range of JS Bach’s music for a long period of time and have been motivated by passion in exploring new avenues of interpretation. The roots of my love and deep loyalty towards Bach go back to my earliest days as a child, when I first was acquainted with his music through the recordings of Glenn Gould. This was what first inspired me to pursue my dream of learning and performing Bach’s complete keyboard repertoire.

The proposed concert programme will explore personal interpretation and embellishment findings in Bach suites and my new project called Bach-Mugham where I am fusing elements of Azerbaijani mugham and music of Bach. Mugham, is the foundation of Azerbaijani classical music traditions and it consists of improvised melodic patterns explored through repeated sections within a composition. I combined the cross-cultural continuum of the improvising traditions introduced by mugham studies and the improvisatory formulation of the Baroque, which C.P.E. Bach described in his book Essay on the True Art of Playing Keyboard Instruments (1753). The fusion of both classical and folk music transferring intercultural ideas, relished the opportunity to experiment with the ‘West meets East’ interface that I explored in the past two years. This idea, associated with Ravi Shankar and Yehudi Menuhin’s West Meets East: The Historic Shankar/Menuhin Sessions (1966), hugely influenced this project and inspired me to explore new avenues of cross-cultural interpretation.” 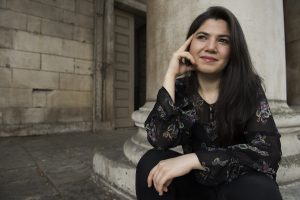 With a life long passion for J.S. Bach’s music, British/Azeri pianist Gunel Mirzayeva’s deeply personal approach weaves together Western and Eastern musical styles. Gunel recently completed a Doctorate at the Guildhall School of Music & Drama under the tutelage of Ronan O’Hora, exploring the cross-cultural influences on contemporary performance practices in Azerbaijani piano music. During her practice-based research, Gunel was invited to the prestigious artistic residencies at the Banff Centre for Arts and Creativity in Canada and the Cité Internationale des Arts in Paris. Additionally, Gunel received regular guidance on improvisational practices from two of the leading experts in this field, Professors. Robert Levin and David Dolan, at the Guildhall School, Lucerne Academy, Mozarteum Summer Academy and Leipzig Bach Masterclasses. These opportunities inspired her to initiate musical projects and develop creative interpretations of Bach’s music.

As an artist, Gunel has performed extensively throughout the UK and Europe. Notable performances include concerts at the Wigmore Hall, Barbican Hall , St. Martins-in-the-Fields, UK House of Commons in London, and Hen Concertgebouw in Amsterdam. She has appeared as a soloist with the Netherlands Symphony and the Azerbaijani State Symphony orchestras.

After completing her doctoral studies in 2020, Gunel was selected to take part at the 8th AEC European Platform for Artistic Research in Music and 1st Official Symposium of the International Council for Traditional Music Study Group on the Global History of Music conferences, where she presented a series of lecture-recitals on the ‘mugham/baroque integration’ as part of the performance practices along and beyond the regions of the Great Silk Road.