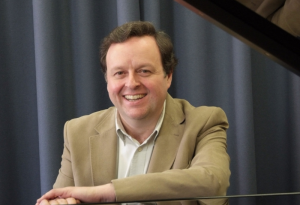 “His sound is lustrous; his playing is lyrical and full of feeling; he thinks not only of the passing notes but of the overall form. Moreover, O’Hora is blessed with meticulous taste – there was not a vulgar, swooning or overstated passage in the program.” The Washington Post

Born in Manchester in 1964, Ronan O’Hora studied there at the Royal Northern College of Music with Professor Ryszard Bakst. He has won many important awards that have included the Dayas Gold Medal, the Silver Medal of the Worshipful Company of Musicians and the Stefania Niekrasz Prize, which is awarded every five years to an outstanding exponent of Chopin. Broadcasts on radio and television world-wide have included a televised recital for the Chopin Society in Warsaw, a televised performance of Beethoven’s 4th Piano Concerto with the Netherlands Radio Symphony, two programmes of chamber music by Mozart for BBC TV, as well as over eighty concerts on BBC Radio 3.

Ronan O’Hora has made highly regarded recordings on the Tring International, Virgin Classics, Dynamic and Fone labels in which he has covered concertos by Mozart, Grieg and Tchaikovsky in addition to solo piano repertoire by Schubert, Brahms, Debussy, Schumann, Beethoven, Chopin, Mozart, Mendelssohn and Satie plus chamber music by Fauré, Britten, Debussy, Dvorak and Mozart in a discography which extends to over thirty CDs. Reviewed as its Editor’s Choice, The Gramophone Magazine wrote ” The Grieg Piano Concerto [with the Royal Philharmonic Orchestra under James Judd] demands imagination and great delicacy of feeling as well as bravura without barnstorming if its eternal freshness is to be caught on record. Ronan O’Hora […] uncannily invests this very beautiful recording with all these virtues, and more besides, for the performance sounds totally spontaneous even on second or third hearings … The cadenza is superb …”

Ronan O’Hora is the Head of Keyboard Studies and Head of Advanced Performance Studies at the Guildhall School of Music and Drama in London.