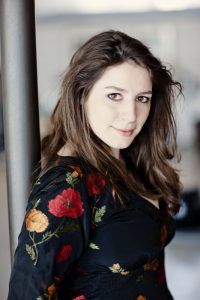 With a voice described by International Record Review as “one of the most beautiful Britain has produced in a generation” Elizabeth Watts is “now established as one of Britain’s leading sopranos” (The Guardian). Her debut recording of Schubert Lieder for  SONY Red Seal, a Gramophone magazine’s ‘Editor’s Choice’, was hailed for its “milky timbre & interpretative maturity” (FT) “technical mastery” (Gramophone) and “radiant delivery” (BBC Music).  She has also released a discs of Bach Cantatas for Harmonia Mundi and and a disc of Strauss Songs for Hyperion, both to critical acclaim. Other recent recordings include CPE Bach’s Magnificat (winning a Gramophone Award) and JS Bach’s St John Passion with Bach St Matthew Passion, Mahler Symphony No 4 . In 2015 her disc of Mozart arias with the Scottish Chamber Orchestra was both BBC Music Magazine CD of the month and Classic FM CD of the week. In addition Elizabeth released in 2016 an exciting disc of rarely heard works by Alessandro Scarlatti, many of which are premiere recordings, and has discs of Vaughan Williams, Britten and the epic Handel Brockes Passion forthcoming.

Elizabeth was a chorister at Norwich Cathedral and attained a First in Archaeology & Prehistory at Sheffield University, before attending the Royal College of Music. She was selected by YCAT in 2004, won the 2006 Kathleen Ferrier Prize, the 2007 Outstanding Young Artist Award at the Cannes “MIDEM Classique Awards” and gained international recognition at the 2007 BBC Cardiff Singer of the World Competition, winning the Rosenblatt Recital Song Prize. From 2005- 2007 she was a member of English National Opera’s Young Singers Programme. She has been an Artist in Residence at the Southbank Centre, London and the recipient of a Borletti-Buitoni Trust Award.

A former BBC Radio 3 New Generation Artist, Elizabeth is much in demand as a recitalist.  She has given recitals at the UK’s leading venues, including Wigmore Hall, Bridgewater Hall, Purcell Room, Aldeburgh Festival and Cheltenham Festival. Further afield, Elizabeth has performed at prestigious venues and festivals such as the Concertgebouw Amsterdam, Hardanger Festival in Norway, with the Orquesta de Radio Televisión Española in Madrid, at the Bad Kissinger Summer Festival, at the Musée d’Orsay in Paris and at the Tonhalle, Zürich. She returns to Wigmore Hall in 2019 for a recital of Strauss, Berg, Chaminade & Rachmaninov.

Other plans for this season and beyond include Ligeti Le grand macabre with Alan Gilbert and the NDR Elbphilharmonie Orchestra, Beethoven Arias with Andrew Manze and the NDR Radiophilharmonie Orchestra on the penultimate night of the BBC Proms, the modern premiere of Dussek’s Mass in C with the Academy of Ancient Music and Richard Egarr, Messiah with the Boston Handel & Haydn Society and Masaaki Suzuki, Christmas Oratorio with the Rotterdam Phil and Nathalie Stutzmann and her role debut as Aspasia in Mozart’s Mitridate for Garsington Opera.

Recent concerts have included Ligeti Le grand macabre and Ravel L’enfant et les sortileges with Sir Simon Rattle and the LSO, Mahler Symphony No 2 with BBCSO and Sakari Oramo for the BBC Proms, The Last Night of the Proms with Sakari Oramo in 2014, Mozart Requiem with the London Symphony Orchestra; Mass in C Minor with Akademie für Alte Musik and Daniel Reuss and with the Scottish Chamber Orchestra and Olari Elts; Brahms Requiem with the LPO and Yannick Nezét-Séguin; Bach St Matthew and St John Passions (concert and recording) with the Academy of Ancient Music and Richard Egarr; Beethoven Symphony No 9 and Haydn Scena di Berenice with the SCO; Mahler Symphonies 2 and 4 and Strauss Lieder with the Netherlands Philharmonic Orchestra; No 4 with the LSO and Michael Tilson Thomas and the Philharmonia Orchestra and Vladimir Ashkenazy; Vaughan Williams Sea Symphony with the Stockholm Philharmonic Orchestra and the BBC SSO and Kurtág Kafka Fragments for Soprano and Violin with the Hebrides Ensemble, as well as performances with Bachakademie Stuttgart and Hans-Christoph Rademan and with RIAS Kammerchor, Berlin and Ottavio Dantone and Handel L’Allegro, il Penseroso ed il Moderato with the Mark Morris Dance Group at Teatro Real, Madrid.

Elizabeth was made an honorary Doctor of Music by Sheffield University in 2013 and a Fellow of the Royal College of Music in 2017.

The pianist Julius Drake lives in London and enjoys an international reputation as one of the finest instrumentalists in his field, collaborating with many of the world’s leading artists, both in recital and on disc. The New Yorker has described him as the “collaborative pianist nonpareil”. He appears regularly at all the major music centres and festivals: the Aldeburgh, Edinburgh, Munich, Schubertiade, and Salzburg Music Festivals; Carnegie Hall and Lincoln Center New York; The Royal Concertgebouw, Amsterdam and Philharmonie, Berlin; the Châtelet and Musée du Louvre Paris; La Scala, Milan and Teatro de la Zarzuela, Madrid; Musikverein and Konzerthaus, Vienna; and Wigmore Hall and BBC Proms London. Director of the Perth International Chamber Music Festival in Australia from 2000 – 2003, Julius Drake was also musical director of Deborah Warner’s staging of Janáček’s Diary of One Who Vanished, touring to Munich, London, Dublin, Amsterdam and New York. Since 2009 he has been Artistic Director of the Machynlleth Festival in Wales. Julius Drake’s passionate interest in song has led to invitations to devise song series for Wigmore Hall, London, the BBC and The Royal Concertgebouw, Amsterdam. His annual series of song recitals – Julius Drake and Friends – in the historic Middle Temple Hall in London, has featured recitals with many outstanding vocal artists including Sir Thomas Allen, Olaf Bär, Ian Bostridge, Angelika Kirchschlager, Iestyn Davies, Veronique Gens, Sergei Leiferkus, Dame Felicity Lott, Simon Keenlyside, Christopher Maltman, Mark Padmore, Christoph Prégardien, Amanda Roocroft and Sir Willard White. Julius Drake is frequently invited to perform at international chamber music festivals – most recently, Lockenhaus in Austria; West Cork in Ireland; Oxford in England; Boswil in Switzerland and Delft in the Netherlands. Julius Drake holds a professorship at Graz University for Music and the Performing Arts in Austria, where he has a class for song pianists, and is professor of collaborative piano at the Guildhall School of Music in London. He is regularly invited to give master classes worldwide; recently in Aldeburgh, Brussels, Utrecht, Cincinnati, New York, Toronto, Minneapolis, Ann Arbor, Vienna, and at the Schubert Institute in Baden bei Wien. Julius Drake’s many recordings include a widely acclaimed series with Gerald Finley for Hyperion, from which the Barber Songs, Schumann Heine Lieder and Britten Songs and Proverbs won the 2007, 2009 and 2011 Gramophone Awards; award winning recordings with Ian Bostridge for EMI; several recitals for the Wigmore Live label, with among others Alice Coote, Ian Bostridge, Joyce DiDonato, Lorraine Hunt Lieberson, Christopher Maltman and Matthew Polenzani; recordings French Sonatas for Virgin Classics with Nicholas Daniel; of Kodaly and Schoeck sonatas with the cellists Natalie Clein and Christian Poltéra for the Hyperion and Bis labels; Tchaikovsky and Mahler with Christianne Stotijn for Onyx; English song with Bejun Mehta for Harmonia Mundi; and Schubert’s ‘Poetisches Tagebuch’ with Christoph Prégardien, which won the Jahrespreis der Deutschen Schallplattenkritik 2016. Julius Drake’s most recent CDs have been widely critically acclaimed and include Janacek’s ‘Diary of One who Disappeared’ with the Scottish tenor Nicky Spence (Hyperion), winner of a 2020 Gramophone Award and a 2020 BBC Music Magazine Award; ‘Paradise Lost’ (Alpha) with the Austrian soprano Anna Prohaska; and Vol. 6 of the Liszt Complete Songs (Hyperion) with the German soprano Julia Kleiter. The second CD in this Liszt series with Angelika Kirchschlager won the BBC Music Magazine Award in 2012. Concerts in the current and coming seasons include a series to celebrate the Beethoven anniversary at the 92nd St Y in New York, a Mahler series at the Concertgebouw in Amsterdam and a two-season series at the Pierre Boulez Saal in Berlin. Other highlights include recitals at La Scala, Milan with Aleksandra Kurzak, at Wigmore Hall with Alice Coote, in Barcelona with Sarah Connolly, at the Schubertiade, Austria with Christoph Prégardien and Ian Bostridge, tours in Europe with Anna Prohaska and Eva-Maria Westbroek, and recitals at the 2021 Salzburg Festival and Edinburgh Festival with Gerald Finley.