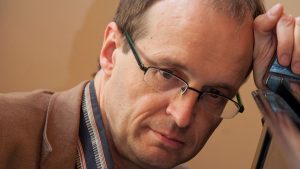 In Memory of his legendary teacher Dame Fanny Waterman

£50 (to include post-concert drinks and buffet supper)

Brahms Variations on a theme of Schumann Op.9

“Prodigy of Prodigies” was how British artist Benjamin Frith was described by Dennis Matthews when, aged just 14, he won the British national Concerto Competition. Since then, he has been a first prizewinner in the Mozart Memorial Competition (London), and was awarded top prize in the Busoni International Piano Competition.

Having achieved rave reviews from his American and Edinburgh Festival debuts, Frith established himself as an international concert artist. He has appeared with many of the world’s finest orchestras including the Berlin Symphony, Israel Philharmonic, City of Birmingham Symphony, Polish National Radio, and the BBC Philharmonic. In 2007 he was the soloist with the Hallé orchestra under Sir Mark Elder at the opening of the Royal Hall in Harrogate. He has worked with many leading conductors such as Zubin Mehta, Antoni Wit, Vasary, Skrowaczewski, Bamert, Atzman and Barry Wordsworth.

His exciting and diverse repertoire ranges from Bach to Tippett and includes over 50 concertos. He has recorded all the John Field Piano Concertos and in 2002  reached the top of the Classical charts and since then he has recorded all Field’s Nocturnes for solo piano. His disc of Schumann’s Davidsbundlertänze was chosen as the top recommendation on the Radio 3 “Building a Library” programme. Five of his discs are represented in the Gramophone – Best CD Guide and in response to his recording of the Diabelli Variations, Gramophone critic Richard Osborne wrote “ he possesses a formidable talent both musically and technically. Indeed, I would go as far as to suggest that there has not been a finer Diabelli on record by a young pianist since the classic recording by the twenty eight year old Stephen Kovacevich in 1968”. A recording of a selection of Scarlatti Sonatas was described in the BBC Music Magazine as follows “Benjamin Frith is an inspired choice for the fifth disc of the Naxos cycle, a compelling advocate of the piano he transports the music to the new medium, capitalising on the piano’s ability to pick out a strand, shape dynamics and bathe textures in subtle pedalling, without ever misrepresenting Scarlatti – a disc to convert the most die-hard authenticist”.

His enjoyment of chamber music has led to many collaborations with artists such as The Lindsays, Peter Hill, The Sorrell and Vertava Quartets. He also formed a piano quartet, which carries his name The Frith Piano Quartet the other players being Robert Heard, Louise Williams and Richard Jenkinson and frequently plays in Duo Concerts with ‘cellist Richard Jenkinson.He has been a lifetime pupil of the legendary Dame Fanny Waterman of Leeds.