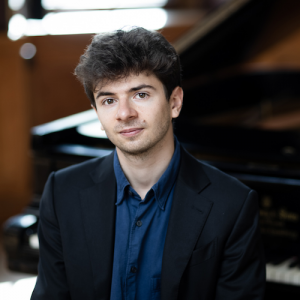 Described by the French radio as ‘one of the most gifted pianists of the youngest generation’ and as ‘a young artist with a distinctive voice’, Franco-Belgian pianist Antoine Préat is establishing himself as a promising soloist and chamber musician.
Antoine was the youngest artist invited to join the Centre de Musique de Chambre de Paris, directed by Jerome Pernoo, with whom he gave a concert series at the Salle Cortot in Paris, sponsored by Deutsche Gramophone. He has been a finalist/prizewinner in numerous national and international competitions such as the Ettlingen Competition for Young Pianists, the Concours International de la Ville de Gagny, the Concours international d’Ile de France, and received an honour prize at the New York Début Piano Competition.

Winner of the Philip and Dorothy Green Award 2020, and recently appointed City Music Foundation Artist 2020, Antoine performs regularly in Europe and the United States in halls such as the Salle Cortot, Salle Gaveau, Wigmore Hall, Thayer Hall, Paris Beaux Arts Museum and Frederyk Chopin Institute. His performances have been broadcast on the BBC, Scala Radio and France Musique.