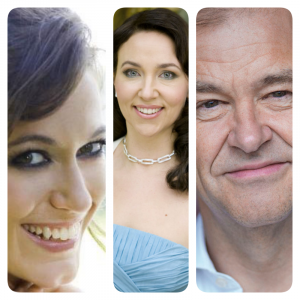 £50 to include post-concert drinks & buffet supper

Buddy on the night shift

Kate Royal studied at Guildhall School and the National Opera Studio. Her awards include the 2004 Kathleen Ferrier Award, the 2004 John Christie Award, and the 2007 Royal Philharmonic Society Young Artist Award. She has appeared in concert with many of the world’s finest orchestras and most eminent conductors. She has also sung in opera across Europe and in the United States, including major roles at the Royal Opera House, Covent Garden, the English National Opera, the Metropolitan Opera, Paris Opera, Teatro Real, Madrid, and multiple seasons at the Glyndebourne Festival.

Among Kate’s recordings is a series released under an exclusive contract with EMI Classics, and she was the featured artist in Volume 10 of Hyperion’s Complete Songs of Robert Schumann, together with Guildhall’s very own professor of piano accompaniment, Graham Johnson.

Christine Rice is an English operatic mezzo-soprano. She was born and educated in Manchester and read physics at Balliol College, Oxford before entering the Royal Northern College of Music to study with Robert Alderson. She has performed across Europe at venues including the Royal Opera House, the Bavarian State Opera, the Frankurt Opera, the Teatro Real and the English National Opera. From 2004 to 2006 she was a BBC Radio 3 New Generation Artist

Julius Drake, described by The New Yorker magazine as the ‘collaborative pianist nonpareil’ lives in London and enjoys an international reputation as one of the finest instrumentalists in his field, collaborating with many of the world’s leading artists, both in recital and on disc. Julius Drake holds a Professorship at Graz University for Music and the Performing Arts in Austria, where he has a class for song pianists and also teaches at the Guildhall School of Music in London. He is an Honorary Member of the Royal Academy of Music. He is regularly invited to give master classes worldwide; recently in Aldeburgh, Brussels, Utrecht, Cincinnati, New York, Toronto, Minneapolis, Ann Arbor, Vienna, and at the Schubert Institute in Baden bei Wien.