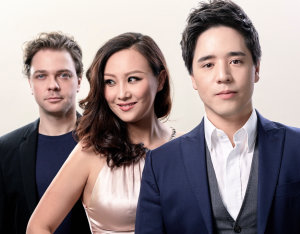 With countless solo prizes to their names, the music-making of the Sitkovetsky Trio is little short of miraculous. In their hands the piano trio becomes a miniature orchestra, making huge worlds of colour and texture from their personal, intimate musical format.

Alexander Sitkovetsky was born in Moscow into a family with a well-established musical tradition. His concerto debut was at the age of eight, and in the same year, he moved to the UK to study at the Menuhin School. His critically acclaimed CPO recording of Andrzej Panufnik’s Violin Concerto with the Konzerthaus Orchester Berlin commemorating the composer’s 100th birthday won an ICMA Special Achievement Award.

Wu Qian was born in Shanghai, where she received her early training before being invited to study at the Menuhin School and was selected as the classical music bright young star for 2007 by The Independent. At fifteen she performed Mozart’s E flat Major concerto (K449) in Queen Elizabeth Hall and again at the Menuhin Festival in Switzerland. She made her debut recital at the South Bank Purcell Room in 2000. Her concerts have been broadcast by NHK for Japan, Phoenix TV for China, and BBC Radio 3.

Isang Enders quickly established himself as a dynamic artist in search of new-concepts and works for the cello. Born into a German-Korean musician family in Frankfurt in 1988, Enders began studying at the age of twelve. His playing is influenced by his studies with Gustav Rivinius, Truls Mørk, and above all, by the mentoring of the American cellist Lynn Harrell. As a dedicated chamber musician, he continues to work closely with the pianist Igor Levit, with whom he has toured extensively. Enders plays an instrument by Jean Baptiste Vuillaume (Paris, 1840).